2016-Aug-17 Filed under: Education,Internship Comments Off

Do you consistently think “breathe in, breathe out” or “left, right, left, right” when you’re walking? Unless you’re London Tipton (http://dai.ly/x31iwo0?start=346 to 6:02), you probably don’t. How is this possible? All humans have neural networks called central pattern generators (CPGs) that control rhythmic movements like breathing and walking. Unfortunately, it is nearly impossible to study this in humans, so we use mushy invertebrates that can show us these CPGs in real time. In the pond snail, Lymnaea stagnalis, there is a buccal CPG that regulates mouth movements, including feeding and laying eggs.

By anesthetizing the snail, implanting an electrode on one of these buccal neurons, observing its behavior and aligning it with the electrical activity, I will be able to see CPGs in action.

This project mainly replicates a 1999 paper by Jansen et al. that studies pattern generators in the buccal ganglia of freely behaving snails with a few tweaks of my own. The buccal ganglia is a group of neurons (ganglia) that controls buccal movements – any behavior related to the mouth. In regards to the freely behaving part, it’s very important in neuroscience for the subject to be freely able to move and behave of its own will in order to see the neurons acting in real time.

In theory, the project isn’t that difficult; put an electrode around a neuron in the buccal ganglia and watch the spikes occur at the same time the snail is eating. However, what’s most challenging about this project is the damn setup to get to the point of data collection. Jansen et al. used these 40 mm pond snails called Lymnaea stagnalis which are super cute but incredibly small for a first-time neuroscientist (think the size of your thumbnail).

The paper focused on data collection from three neurons in the buccal ganglia: the posterior jugalis nerve (PJN), the lateral buccal nerve (LBN), and the ventral buccal nerve (VBN) which can be seen in the picture shown. The LBN and VBN actually stem from the same neuronal branch and eventually split into their respective neurons, so for simplicity’s sake, I’m implanting my electrode around the initial branch for both nerves. **This has been updated to put the electrode on one of the esophageal trunks that control the movements of the esophagus.**

In terms of the buccal movement, snails rasp or scrape their toothy tongue called a radula across a surface, like a tank with algae or a piece of spinach, in order to collect food or clean. They rasp when they eat or, interestingly enough, when they lay eggs. The substrate that they lay their eggs on needs to be clean so they rasp it clean. Both of these movements are controlled by the buccal ganglia. The buccal ganglia stimulates the idea of “start rasping,” sends it down one of the neurons, like the LBN or VBN, which then stimulates a muscle that controls the radula to initiate rasping. Jansen et al. found that the electrical activity seen in the spikes changed in frequency and amplitude depending on the behavior at hand. More explicitly, when the snail was eating, the spikes occurred more often with large amplitude versus when the snail was cleaning to lay eggs, the spikes occurred less often and with a lower amplitude (see picture). Although this would be awesome to see for myself, due to time constraints, I will only be observing the electrical activity in accordance with feeding.

2016-Jul-10 Filed under: Uncategorized Comments Off

After a long and difficult time discovering the buccal ganglia, I recommend using a microscope with at least 6-8 Watt LED bulbs or else you will struggle to find the right area. The buccal ganglia is almost bikini-shaped as shown in the previous log from Ramakrishnan et al. 2014 and is seated directly behind the mouth. Best of luck!

2016-Jul-01 Filed under: Internship Comments Off

Upon reading a new paper, I have determined a new location for the electrode (when I get that point in the experiment): the esophageal trunk! Ramakrishnan et al. in 2014 studied the buccal A cluster (BAC) cells that fill up the buccal ganglia, 40 in each. These cells vary in location, size, and the cluster that they’re in but essentially are responsible for telling different muscles to move, like opening the mouth or bringing the radula to the surface. All of these BACs have axonal projections through different nerves branching from the ganglia that we’ve talked about before: the lateral buccal neuron (LBN), the posterior buccal neuron (PBN), the esophageal trunks (ETs), and a few through the cerebro-buccal connective (CBC) that all then connect to different muscles. However, every one of these BAC projections goes through the esophageal trunks and none go through the ventro-buccal nerve. My plan was to attach the electrode to the trunk of the lateral and ventral buccal nerves, which is technically still okay, but only one nerve will be receiving signal. In the picture below from Ramakrishnan’s paper, you can see that there are connections in every neuron except for the VBN with the lightest grey view. 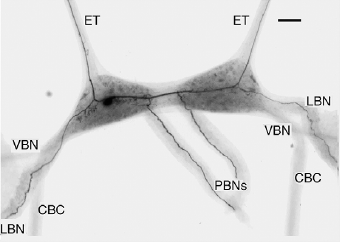 HENCE I will be placing the electrode around one of the esophageal trunks for a *hopefully* stronger signal. Until I get to the point of electrode placement, I am continuing the search for the buccal ganglia.