Spikes on a Plane!

Flying back from a successful trip from California, Tim and Greg of Backyard had decided there was time for one more experiment…

Thanks to the kind TSA folks at the San Francisco International Airport and Delta airlines, we were able to record spikes in flight. Quite possibly the first neurons ever recorded on a commercial airline!

With the exception of one dissenting voice, the passengers on board were a great audience. By coincidence, the person sitting in the seat next to Tim and Greg was a neuroscientistfromBritain! He helped design our working hypothesis for the experiment: spikes will fire less with decreased O2 pressure in the cabin. Here are some of the photos from the historic flight.

Our flight attendant was gracious enough to loan us anaesthesia in the form of a cup of ice and a Coke Zero (and a bag a peanuts).

While we failed to determine if decreased air pressure changed the spiking rate of insects, we determined that the overall experiment was a big success!

As you know, Backyard Brains is a small start-up in the struggling state of Michigan. Last month, Ray Suarez and the crew from PBS came to highlight Ann Arbor, as one type of city in it’s Patchwork Nation project. The scope of this project is add granularity to gross segmentation of “blue states” vs. “read states”, and they have identified 12 types of places across the US, including: Evangelical Epicenters, Empty Nests, Boom Towns, etc.

Each of the 12 region types were highlighted by choosing a city and focusing attention on some aspect of life there. Ann Arbor was chosen as the quintessential “Campus and Careers” city, so PBS focused on how Ann Arbor is surviving in a turbulent Michigan economy. Backyard Brains does make a brief cameo in the beginning. Enjoy!

While Tim was on a roadtrip for an interview with the Kauffman foundation, he made a pit stop in Salt Lake City to visit some friends at Ripple. While we at Backyard Brains pride ourselves on our single channel neurophysiology, the engineers at Ripple are designing a >1000 channel neurophysiology system! We picked their brains (using language of course), and you can see Shane Guillory skeptically analyzing the output of our SpikerBox: 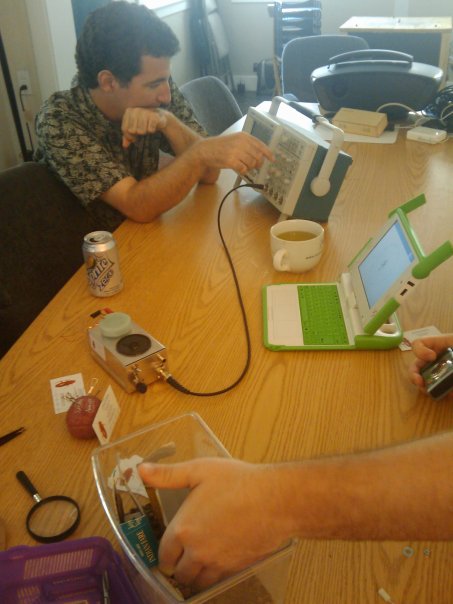 The folks at Ripple are enthusiastic about ByB, and kindly offered up some help on circuit design, publicity, and partnering at conferences. Look for us occasionally hanging out at the Ripple booth at SfN in Chicago. There may be some new implementations of Mind War…. Thanks for lunch guys!